As the liver is the primary site for drug metabolism, the PXB-mouse is the best available model to predict human-specific metabolism prior to clinical trials. Two Studies performed with the support of PhoenixBio through the Chimeric Mouse with Humanized Liver (CMHL) Consortium are highlighted below.

The biotransformation of four compounds with disproportionate human metabolites was evaluated by the Takeda team. The open access paper entitled "Prediction of Human Disproportionate and Biliary Metabolites Using Chimeric Mice with Humanized Liver" was published in Drug Metabolism and Disposition in 2020.

The comprehensive investigation of three radiolabeled compounds ([14C]desloratadine, [3H]mianserin and [2H]carbazeran) and one non-radiolabeled compound (cyproheptadine) was performed. The use of radioisotopes allowed capturing virtually all drug related materials in radiochromatographic profiles of all matrices used in the study: plasma, urine, bile and feces. 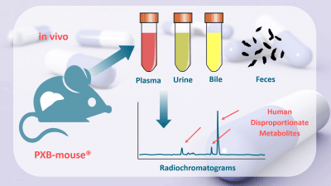 The compounds were selected based on their known species-dependent metabolic profiles including disproportionate circulating and/or excreted metabolites of each of these compounds have been reported in humans compared to preclinical safety species. It is also important to mention that these model compounds cover a variety of metabolic pathways, involving cytochrome P450 (CYP450), uridine diphosphate glucuronosyltransferase (UGT)-, and aldehyde oxidase (AO)- mediated metabolism.

The absorption, metabolism and excretion of these compounds were studied, and metabolite profiling of the selected compounds was monitored in plasma, urine, bile and feces. Each compound was dosed to intact or bile-duct cannulated PXB-mice or control mice. As bile samples are typically not available in human ADME (absorption, distribution, metabolism, and excretion) studies, the proposed approach using the PXB-mouse® is beneficial in helping to understand the biliary clearance mechanism of drugs in development.

The publication "Evaluation of the Utility of PXB Chimeric Mice for Predicting Human Liver Partitioning of Hepatic Organic Anion-Transporting Peptide Substrates" by Vertex Pharmaceuticals appeared in the same journal and is available as a full text version online. 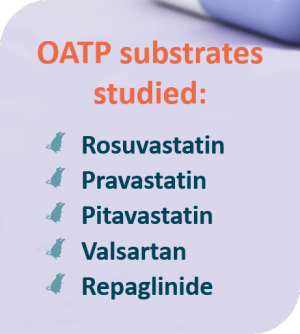 The authors evaluated the PXB-mouse® for its ability to predict human liver disposition of five OATP (organic anion-transporting peptide) transporter substrates: rosuvastatin, pravastatin, pitavastatin, valsartan and repaglinide. The ability to predict human liver-to-plasma unbound partition coefficient (Kpuu) is important to estimate unbound liver concentration for drugs that are substrates of hepatic OATP transporters with asymmetric distribution into the liver relative to plasma. Both in vitro and in vivo data suggest that mouse liver has a stronger transporter-mediated hepatic uptake than the humanized liver in the PXB-mouse®. The chimeric mouse with a humanized liver (PXB-mice) liver-to-plasma Kpuu values were compared with the reported human Kpuu, and a good correlation was observed as the PXB-mice Kpuu values were within 3-fold of human Kpuu.

The results of both studies highlight the value of using PXB-mice in preclinical evaluations of drug candidates, where predictivity of human specific metabolism, identification of drug metabolites and evaluation of drug-drug interactions are required. PhoenixBio continues to support the CMHL Consortium to validate the chimeric mouse with a humanized liver model in novel applications.